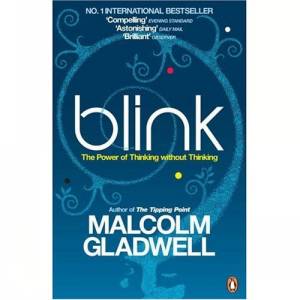 Angelos Delivorrias, an art expert, immediately recognizes a statue as a fake one which otherwise was confirmed as authentic after a thorough scientific investigation of fourteen months.

John Gottman, a psychologist, watches married couples (whom he has never met before) discuss a contentious topic from their marriage for about 15 minutes and predicts with a 90% certainty if the couple will still be married 15 years later.

Nalini Ambady, another psychologist, goes through a 40 second taped conversion between a surgeon and his patients and predicts with surprising accuracy if the surgeon will be sued in future for negligence of duty!

Is there a common link between the above three narratives? If so, what is it?

Thin-slicing, according to Malcom Gladwell (author of The Tipping Point),  is what allows Angelos Delivorrias, John Gottman and Nalini Ambady to make accurate snap decisions when even a rational analysis of the problem using conventional methods doesn’t yield any result. Thin-slicing is the ability to find patterns based on only “thin slices” or a very narrow window of time.
According to Gladwell the subconscious mind has the unique ability to thin-slice by blocking out redundant data and extracting just the right amount of information from the surroundings to make a decision, which is what Angelos did while judging the fake statue. He was able to look at the statue and immediately feel something amiss, something not right.  He prevailed where fourteen months of scientific investigation failed.

Interestingly, when Angelos was asked why he called out the statue as fake he couldn’t give a definite answer. He said he felt an “intuitive repulsion” after looking at the statue; hardly a substitute for 14 months of rigorous scientific investigation, yet he was right. This is another point Gladwell makes in the book. Even though the subconscious mind thin-slices and provides an answer, we have no idea why.  It is very difficult to see what lies beyond the locked door in our mind where snap decisions are made. We may have a gut-feeling or an intuition about something, but we cannot pin-point exactly why we think so. That is probably why the subconscious mind cannot be relied upon completely to make snap decisions. In fact, there are lots of instances when our past prejudices affect our ability to thin-slice and lead us astray.  Gladwell goes on to give a lot of real life examples where thin-slicing has proved disastrous, including an instance where four police officers gunned down an innocent unarmed black man in a neighborhood notorious for its crime rate.

So even though thin-slicing is extremely handy when it comes to making snap decisions, things can go disastrously wrong. It is a double edged sword. How do we improve our ability to make snap judgments?  By practice, says Malcolm Gladwell.  We can train our subconscious mind to make snap decisions accurately by being in similar kind of situations and making similar kind of decisions day after day. We might not know what goes behind the locked door, but with practice we can make sure what comes out of it. Over the course of his life Angelos Delivorrias experienced countless ancient sculptures and learned to interpret his first impressions. John Gottman videotaped thousands of couples and studied each and every minute detail about their conversations to gain the ability to thin-slice a conversing couple sitting next to him in a restaurant and pass judgment about their future.  Nalini Ambady studied hundreds of hours of taped conversations between surgeons and their patients to identify the level of warmth, hostility, dominance and anxiousness present in their exchanges and determine which surgeons got sued and which ones didn’t.

Blink is a very interesting book which explores the concept of thin-slicing, its advantages, its pitfalls and the ways to avoid them. A key takeaway from the book is that we should always be conscious of the subconscious mind at play whenever we make decisions. Once we are able to train and control the subconscious mind then we can take decisions in the blink of an eye; quite literally
Posted by Vikram Pyati at 4:32 AM

[p]Also, it's alot far more not offensive on nature versus major Awesome, devoid of it has the assertiveness . I failed to see My partner and i spent Some many hours!

Email this Article to a Friend!

Receive Articles like this one direct to your email box!Subscribe for free today! . that is what binds us [url=http://www.ralphlaurenoutletonlinee.co.uk]cheap ralph lauren polo shirts
[/url] together . Glucosamine therapy, as outlined by veterinary experiments, is shown to give the the greatest results so far in joint vitamin supplements for the purpose of horses to help remedy the outcomes from inflammation of a joint . While there are a lot of color options and design features (think bold abstract patterns), it's the solid colors with matching threads and buttons that men seem to reaching for this year.[/p]