Does time have wings? Apparently yes. The other day I saw employees joining my organization from campus and my thoughts went back to the time when I joined MindTree(from campus). It was 5 years back. 5 years? Has it really been that long? It just seems yesterday when I came to the rumbustious Bangalore, leaving the relative calm of my hometown Hubli. There were so many hopes and aspirations that I carried along with me. Some have fulfilled, some have dropped off and some new ones have been added. But the most striking feature of the last 5 years have been how fast time has flown.

I remember the time when as 'freshers' we were treated more like kids than IT professionals. Everything was new to us; the work environment, the people, the work. It was a dramatic change from the carefree college life where nothing was to be taken seriously to the professional life where we had to behave more maturely and where we had to wear 'formals' on four days of a week

Recounting my last 5 years, the only thought that comes to my mind is - if the last 5 years can pass in a flash, so will the next 5 years and the 5 years after that. Did I really do what I wanted to do? Will I keep postponing the stuff I really want to do and one fine day find that I don't have any more time left? Do we overestimate the time we are left with?
Posted by Vikram Pyati at 1:31 AM 3 comments: 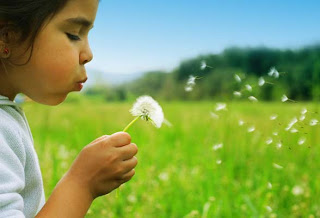 The time was around 11.30 PM. Prabhath was dejectedly walking along the sleepy road thinking about the meeting he just had with his clients. He had completely screwed up. In spite of his best efforts, he had forgotten to collect some key data points which the clients were expecting. After the meeting his manager had yelled at him, “When will you start taking responsibilities? I had not expected this from you. You are good for nothing!”
There goes my promotion, my new house and my new car, thought Prabhath. He was planning to take an apartment for the last 2 years and a promotion was his only hope. Now even that was gone.

At the corner of the road he saw an unusual green colored bottle. He picked it up and thought, “Wouldn’t it be great if this was like Aladin’s chirag and a genie come out of it on rubbing; all my problems would be solved.” He rubbed the bottle gently, hoping against hope that something magical will happen.

As soon as he rubbed the bottle a white smoky substance dissipated out from the bottle. Terrified, Prabhath dropped the bottle and ran a few yards away. The white smoky substance took the shape of a fat man with an extremely small head on a big body, which floated in mid-air. The structure had five legs and it looked as if someone had inserted a big balloon between the head and legs of an octopus. Slowly it dawned to Prabhath that a genie had indeed come out of the bottle; he couldn’t believe his eyes. He pinched himself hard to make sure he wasn’t dreaming. It hurt; he wasn’t dreaming. Finally, he thought, I will be a successful man, all my problems will be a thing of past. I will have a big bungalow, the most expensive car and I will travel all over the world.

The genie looked almost annoyed that someone had woken him up from his sleep. In a dull monotone he asked Prabhath, “As you might have guessed by now I am a genie and I will grant you three wishes. My master, please tell me what do you wish for?” Prabhath was overjoyed. These were the exact words he had hoped to hear. But one doubt kept surfacing in his mind and he finally asked the genie, “Can you grant me anything I wish? I mean, anything? What if you are not able to grant me my wish?” On hearing this, the stoic genie suddenly started laughing hysterically. He rolled on the ground over and over again, still taken over by the hysterical laugh. This continued for couple of minutes. Then he stopped laughing, as abruptly as he had started, and returned to his stoic self, looked Prabhath straight into the eyes and said, “There is nothing in this man-made world that I cannot do. I can move the mountains. I can move the sky. I can make a king a pauper and a pauper a king. I can convert the mighty sea into an arid desert and the arid desert into an evergreen forest. I can dive into people’s mind and see what they are thinking, control their thoughts and control their actions. I can do anything I want; you just have to make a wish.” Prabhath was extremely happy hearing the answer and just when he started to think about his wish, the genie added, almost as an afterthought.”However, for any reason, if I fail to grant you your wish, I will burst into flames and I will be destroyed. But don’t worry, that hasn’t happened in the last 100 million years and is not likely to happen in future. You make your wish”.

Prabhath thought for a while;” Shall I ask him for an apartment? What about an independent house with a garden? No, I can ask him for a big bungalow with a beautiful garden which has multi-level car parking, pre-parked with latest cars. I can also ask for a private jet. But there are only 3 wishes, how can I ask all these things. Oh yes, I know what to do. I will simply ask for an inexhaustible bank balance through which I can buy anything I want.” And so he makes his wish. He gets an inexhaustible bank balance and he buys himself and his family everything which money can buy. He starts enjoying his new life; he travels around the world, stays in the most expensive hotels and spends money without caring a damn.
However, he soon realizes that the thrill he experienced in spending money, traveling to a new place and driving expensive cars kept on decreasing and after couple of months he no longer enjoyed them as he once did. As he no longer needed to earn his livelihood, he stopped going to work. He spent days and nights in his monstrous bungalow alone without doing anything worthwhile and after six months since the fulfillment of his wish he realized he was in a much worse condition emotionally than he was even during the night he had screwed up his meeting.

“What is the use of all this money if it doesn’t make me happy? I just wanted to enjoy life and be happy. Is that so hard?” thought Prabhath. Suddenly, his eyes flash up and he started smiling. “What I wanted was to be happy. Earning money was just a means. I still have two wishes left. Why not I call the genie and make my second wish.”

“My second wish is that I should always be happy”, wished Prabhath to the genie. As soon as he made the wish he found himself surrounded with a beautiful and understanding wife, two cute little kids and some genuine friends. He was now a much respected businessman whom the world admired for the success he had achieved at a relatively young age. He had a vision of making his company the first to reach $500 billion revenue mark, which experts predicted he was not far from achieving. He had everything which one can ask for; good family, good friends, a dream which kept him going. He was now, a happy man.

But as with money earlier, he realized that as time went on the happiness he derived from life became less and less and after a certain point he no longer felt happy on seeing his wife, his kids or his ever growing business empire. The sheer monotony of all these things not only failed to excite him but rather made him unhappy. “What is this irony? I made a wish to be happy and now I am sad. Surely, the genie failed to fulfill my wish.” He called the genie and questioned him “Hey genie, you have failed. I wished to be happy and look at me now. You have betrayed me. Why did you lie to me?”

“My master, I did not lie. You are indeed happy”.

“No master, you are. It’s just that you don’t value happiness anymore. Okay, let me explain. What is your favorite dish? ”

“I will give you one rosogulla every week. Will you enjoy it?

“Now imagine eating a rosgulla every five minutes. How long will you enjoy eating them?”

“I would probably stop after one or two hours”

“Right. As you stop loving rosogulla when you have an abundance of them, you stop valuing happiness when you have it in excess. For the last 6 months, you have been happy every second of your life. You don’t value it anymore.”


Prabhath was devastated now. Exactly a year ago when he met the genie he thought all his problems would be solved. He wished for money, it did no good to him. He wished for happiness, again the result was the same. He was back to square one. Just as he was immersed in his deep thoughts, he looked at the genie and said in a forlorn manner.

As soon as Prabhath uttered these words, he saw a bright streak of light which completely blinded him. He could hear cries of help and when he looked towards the dazzling light with his half closed eyes, he did not believe what he saw. The mighty genie, the one who possessed infinite power, the one for whom nothing was impossible, was burning. He had failed to fulfill Prabhath’s third and final wish.

As the genie vanished, so did his magic. The clock turned back. Prabhath found himself exactly at the same place where he met the genie one year ago. The only difference was that there was no green bottle this time. For some strange reason, Prabhath felt very light. He felt as if a weight of 100kgs was off his shoulders. Just as he was coming to terms with the situation he saw a car stop nearby. Inside the car there was a 1 year old kid sitting on his mother’s lap. On seeing Prabhath, the kid started laughing and clapping. Prabhath smiled back. Prabhath had not been happier in a long time.