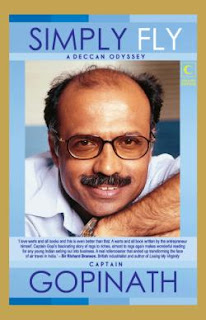 In the small village of Gorur, located in the interiors of Karnataka, the headmaster asked a bunch of school kids if they were interested to write a competitive administration exam for a novel military training school called Sainik School. An 11 year old boy raised his hand, even though he did not know the real meaning of ‘military’, or had any idea of what he would be doing there. He only had a dream of stepping out to the unknown. It was this adventurous trait of him that would go on to define him in the future. The boy was G.R.Gopinath, the father of low cost airlines in India. Simply Fly is a remarkable story of a village boy’s journey through life, the challenges he faced, the ups and downs he experienced and the unbridled optimism with which he approached every event of his life.

The early parts of the book talk about his childhood, the time he spent in his native village of Gorur, his move to the Sanik School in Bijapur and finally his experiences in the National Defence Academy (NDA) (some of them are quite humorous!). Further, he describes his stint in the Indian Army, where he fought the Bangladesh liberation war. After the war he was posted to some challenging locations, one among them a picket called 4752, where the maximum summer temperature hovered around minus two degree Celsius!

Though Army life had been wonderful for him, it was, in his own words, “too regimented and predictable” for his liking. He was not enjoying his stint in the Army and thus one fine day he quit and came back to his village.

Though he quit the Army, he had no idea what he would do for a living. At the same time the government was building a dam on the Hemavathy river which would submerge Gopinath’s ancestral land. As compensation the government had provided 10 acres of land each to his father and his three brothers. The land was largely barren, with patches of jungle and scrub forest and without any proper access route. That is why when the Captain declared that he would start living there and set up his farm, his father could only utter two words, “Ningenu Huccha?” (Are you mad?) Almost everybody tried to dissuade him from taking to farming, but the Captain was adamant. He had a vision for the farm and he would not stop until he achieved it.

His struggles to set up the farm are some of the most inspirational parts of the book (along with his setting up of Deccan Aviation). To begin with, he only had Rs 6000 with him and needed capital to set up the farm. But the banks where he went to take the loan were rude, apathetic and indifferent. On top of that he also had to face the hostility of the nearby villagers who were not too happy with his arrival as they were using the land earlier for grazing their cattle, which obviously they could not do any more. There were innumerable other roadblocks like lack of electricity, floods and drought But Captain Gopinath, through sheer grit and determination and single minded focus on the goal, was able to cross each one of these hurdles and went on to set up the farm successfully. He was eventually awarded the Rolex award for Enterprise for employing eco-friendly ways of farming. Along with the farm he also dabbled in other businesses like a motorcycle dealership, opening a hotel business, working as a stock broker and setting up an Agricultural consultancy!

Soon thereafter, Captain Gopinath took a plunge in politics and stood for the election on the ticket of BJP. His “can-do” spirit is further evident here as he faced a lot of challenges on account of him being a first-timer and also because BJP was pretty much unknown in the state at that time. Particularly interesting is his duel with Deve Gowda, one of the strongest leaders of the state, where Gowda had to eventually retreat! Though he lost the elections, it did not sadden him. As he writes, “Yes, there was disappointment, but there was also a curios sense of exultation. I had discovered a strange power within me”.

Gopinath soon shifted to Bangalore where he began socializing with his old Army friends. One of them was Captain K.J Samuel. He was a freelance pilot, flying helicopters all over India. One day he suggested to Captain Gopinath, “Why can’t we do something with the helicopters?”  The seed of Deccan aviation was planted on this day. Sometime later, with Samuel’s words in his mind and inspired by the newspaper report of a Vietnamese girl who flew investors and aid workers in a helicopter over Vietnam, as the infrastructure in the country was totally devastated due to the war, Gopinath thought, “If helicopters can work in Vietnam, so can they in India, where the infrastructure is as bad!”. He decided that he will start a helicopter company and Deccan Aviation was born.

As Captain has mentioned in the book, setting up the new venture was similar to setting up his farm; only that this was at a much bigger scale and the challenges much tougher. His ordeals with the bureaucracy and his successful way past the labyrinth makes for a very inspiring read. Like the instance where just to get a NOC from the government for the new company, he had to toil hard for two long years! Gopinath’s experiences convince you that if you have the will, have decided in your heart that no matter what, the goal has to be achieved, then no one can stop you from achieving it. After years of relentless pursuit, hard work and sacrifices the helicopter business was firmly established. It’s a tribute to his vision and courage that starting off with such meager resources, he was able to establish the business in a capital intensive industry like aviation.

Upon the success of Deccan Aviation, Gopinath decided to enter the airline industry – by starting a low cost airline, Air Deccan. If anything, this was a much bigger risk. For all its challenges, one thing in his favor when he started Deccan Aviation was that there was very little competition, but here there were established players and the sector was notorious for its cut throat competition. There were also suggestions that the low cost model will not work in India. But the Captain had complete conviction in his business model and had a novel dream – to make the common man fly. The airline experienced exponential growth and within a very short time it even overtook the national carrier.

However, new challenges emerged which throttled the growth of Air Deccan. The challenges, among others, included poaching of its pilots and engineers by the rival airlines and the collapse of its IT system. Gopinath had no choice but to seek external funding, even if it meant ceding control of his say in day-to-day running of the company. Eventually the company had to be merged to Kingfisher airlines. The last chapter talks about his new venture – Deccan360 – which he funded by mortgaging everything he had, his house, his shares and his stocks. He started all over again!

A couple of the things that stand out from the book are Captain Gopinath’s unflinching optimism and his courage to follow his dreams, even though they may look implausible and impractical at first. Couple of years ago, I read the popular book The Alchemist. If I call Simply Fly the non-fictional counterpart of The Alchemist, it would not be entirely wrong.

Simply Fly is a must read. It motivates you to flap your wings and take the flight to the unknown island of your dreams.
Posted by Vikram Pyati at 9:59 AM 6 comments: